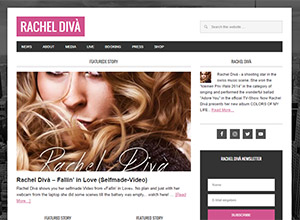 A shooting star in the Swiss music scene.

She won the "kleine Prix Walo" 2014 in the category of singing and presented the debut single “Adore You” – a wonderful pop-ballade – with the Cello player Liz Schneider aka White Cello in the official TV-Show.

The musician from Muotathal wrote her songs really young; with only eight years old she wrote her first song. She can’t read notes but she learned the piano &guitar playing. She sang also in the choir to form her voice. The very first success she reached in 2008/2009 with her band “MaRa” in the BandX Contest (3rd Place).

Rachel worked in 2015/2016 with Pascal Brunkow and the worldwide successful musicians on her first official album which came out 01.07.2016. The Album "COLORS OF MY LIFE" including 11 own written songs from Rachel and one cover-interpretation. They’re about personality impressions and experiences from her life and comes directly from her heart. She want that people think about the life – that’s why she wrote this songs…

The music from Rachel is not just one genre. She has much ballads like "Adore You" but many up-tempo songs you can put in rock, country, funk and soul. On stage you can listen and feel her solo, duo or with her complete band.