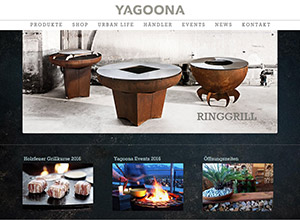 Yagoona exterior design started in 2009 by an Australian who made Switzerland his home after marrying a Swiss girl and moving to Switzerland in 2001.

Even though Alexander was born an raised in Australia, his family all come from Russia. This heritage has blended togther to form the foundations of Alexander's passions as an artist, designer and inventor. A practical upbringing in Australia in a Russian family steered him to the more pragmatic career as a surveyor and civil engineer. For years this career dominated Alexander's world until 2009 when he realised that his creativity needed to be released. This was the start of 'Yagoona'.

Yagoona is now an established name in Switzerland for modern designer firebowls and BBQs.