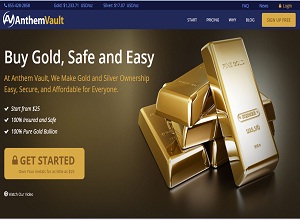 Anthem Vault was founded in February 2011 by CEO Anthem Blanchard. Anthem brings his extensive knowledge of the gold and silver industry from both his experience as Director of Strategic Development and Marketing with European-based company, GoldMoney, as well as from being raised by a goldbug and precious metals pioneer, James U. Blanchard III, who helped restore Americans' right to own gold and founded rare coin and bullion company, Blanchard & Company.

During Anthem's tenure with GoldMoney, he helped develop and implement their current business model and oversaw marketing and product development efforts, which resulted in an increase of total value held by the company from $1 million in 2002 to $368 million by 2008. Today, the company holds over $2 billion in client assets. He also assisted thousands of clients by answering their questions regarding buying gold and silver.

Since 2010, Anthem has served as an independent director and member of the audit committee, compensation committee and nominating committee at Pernix Therapeutics Holdings Inc. (ticker symbol: PTX, traded on NYSE MKT), a pharmaceutical company based in the Woodlands, Texas. Anthem holds a Bachelor of Business Administration (B.B.A.) from Goizueta Business School at Emory University with concentrations in Professional Accounting (CPA) and Finance.

OUR HISTORY The Blanchard name stands for trust, integrity and security in the precious metals business, and it has done so since 1971, starting with Anthem's father, James U. Blanchard III. He bravely fought for Americans’ right to legally own gold and spent the next three decades championing the inherent value of precious metals. He created The National Committee To Legalize Gold, Gold Newsletter, The National Committee For Monetary Reform, James U. Blanchard & Company, The Blanchard Group Of Funds, Jefferson Coin & Bullion, co-founded Louis Rukeyser’s Wall Street Newsletter, wrote several wealth-related books, dined at The White House, and supported freedom causes all over the world.

James U. Blanchard III created the world’s largest rare coin and bullion company and improved the financial wealth of countless people in the process.

With Anthem Hayek Blanchard at the helm, Anthem Vault continues this fine tradition today, putting to good use the accumulated knowledge and expertise in precious metals and investment strategies, while our cornerstone Anthem Vault Standard secures, protects and insures your gold and silver assets.

A safeguarded and encrypted account with Anthem Vault offers an easy, safe and secure way to buy, sell and store fully insured gold and silver, enabling you to accumulate and preserve real wealth.