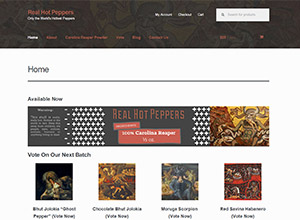 Only the World's Hottest Peppers.

Real Hot Peppers was founded on October 31st, 2014 when a hellish portal ripped open, spawning a line of products so delicious and sinful that only the bravest of souls dare tempt its fate.While it has never been confirmed how the portal opened, it was formed at the crux of what is known as the Middle Oconee and Broad Rivers in Athens, Georgia. Though they do not claim to have opened the portal themselves, Jason and Sergei were nonetheless directly in front of it when it split open space-time on that fateful day. Being of strong constitution and smelling aromas of chili and cooking meats, Jason and Sergei entered the portal and braved their way through the seven layers of hell directly into Lucifer’s kitchen. While the stories of their journey is for another day, Jason and Sergei returned with the formulation for the most devilish line of seasonings to add fire, pain and flavor to every dish under the sun.

Things have quieted down since then – Jason and Sergei began bottling their sinful concoction by the name of Real Hot Peppers. Never adulterated with impure ingredients, always sourced from the highest quality crop available and hand-bottled in limited quantities for a guaranteed excellent product, Real Hot Peppers is an authentic addition to your kitchen. As Jason and Sergei like to say: “From Lucifer’s kitchen, to yours!”