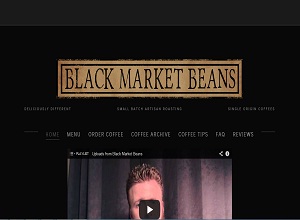 Black Market Beans was started by Josh Robertson in 2013. Here is his story...

Josh Robertson thought he had it all figured out in 2008. He was a successful video game producer and art manager, he was engaged to the beautiful and talented Ms. Jessica Van Hulle, and was on his way to fulfilling his dream of making awesome independent games.

And then his life exploded. Like so many of our fallen comrades, Josh was hit hard by our "economic downturn". Long story short, Josh and Jessica ventured into the wilderness of Oregon to rebuild their shattered lives.

After the smoke cleared, Josh got himself a bunch of part time jobs and began home-roasting coffee and building his own roasters in 2011. The challenges of the recession led Josh to re-evaluate his life, especially the "security" of being an employee. He came to understand his own entrepreneurial spirit and deepest values of independence, fine craftsmanship, and good quality of life. As he served his deliciously different single origin coffees to friends, co-workers and family, Josh was inspired to start his own small coffee roasting business, and Black Market Beans was born.

He needed a place to legally roast and run the business, so Josh built a small roasting facility by himself, by hand while working three part time jobs to make ends meet. Why did he do this?

"Mornings are tough enough as it is," he says, "and I believe everyone deserves something better in the morning ."

When he's not roasting a new batch of beans, he's spending time with his best friend/wife Jessica, playing League of Legends, Planetside 2, FTL and Hearthstone, and still planning his own independent games.