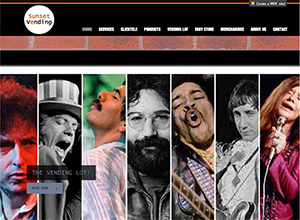 Sunset Vending Co., Sunset’s official licensed, brand and artist merchandising division that produces, manufactures and licenses high-quality officially licensed collectibles and band merchandise to music, Television and Film fans all over the world. The company works with all new acts signed through Sunset along with officially licensing legends and the top branded artists in entertainment, creating a unique and innovative product line that is carefully tailored to each artists' brand. All products are sold at live shows, via selected retail outlets that are brick n mortar outlets, and through us exclusively at specific online stores. Since opening its doors in 2011, Sunset Vending Co. has been able to leverage a global sales and distribution network that works in the S2e system, and is also a vital part of the record label's marketing effort(s).