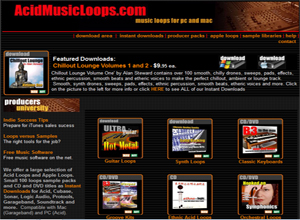 All Loops on our CDs were either recorded by or engineered and mastered by Alan Steward. Alan Steward has helped artists reach the top of the charts for almost 10 years. He worked in the studio with artists like Eddie Kendrix of the Temptations (#1 hit "Keep on Trucking") and Dennis Edwards (#1 hit "Don't Look Any Further") He recorded and remixed artists like the Baha Men (#1 hit "Who let the Dogs Out") and many other grammy winners and nominees. He operates his own recording studio and production company and is always helping new artists release their music. Besides being a top class sound engineer (He did concert sound for top stars from Lou Rawls, James Brown and Melissa Manchester to the Temptations and Inner Circle) Alan is also a multi-instrumentalist playing drums, bass, guitar and keyboards. His music has been heard on major television networks in 14 countries and on major motion pictures.