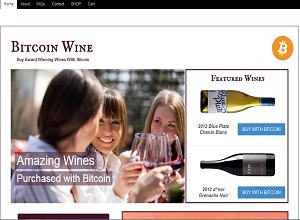 This site has been a long time coming. Four years ago, the three of us started a winery, began making great wines, and built a national distribution network to spread the word. We’ve watched it grow into a thriving business, and that’s been awesome.

Bitcoin came on the scene more recently, though, and we’ve had a hard time paying attention to anything else in the time since. This curious currency has absolutely dominated tech blogs, financial and mainstream news, etc. It’s everywhere. Now, we’re still making badass wines, make no mistake, but digital currencies are here to stay, and that much was apparent from the start.

We decided to throw our hats into the ring almost immediately, and we became the first US winery to accept Bitcoin for our wares. Then some cool things happened. The post we wrote announcing our intention to sell wine for Bitcoin was read over 100,000 times! Jeff got interviewed by Forbes. Amazing.

But the coolest thing to happen? We sold tens of thousands of dollars (in Bitcoin) worth of wine. The early Bitcoiners who had made fortunes? Turns out they were thirsty, and sick of dealing in fiat just to bring a nice bottle to dinner.

It became clear so quickly that Bitcoin was too big to shoehorn into our conventional site, and needed a home of its own. Thus, Bitcoinwine.com was born, and we’re excited to grow alongside this financial revolution. Here’s to great things to come.