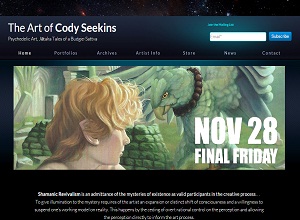 Cody Seekins was born in Jamestown, North Dakota in 1977 and then quickly relocated to live in Kaiserslautern, Germany at a few months old; initiating his childhood as a military brat. By high school graduation Cody had lived in over seven United States, in addition to Italy, and a second tour in Germany.

Cody’s interest in fine art began through concurrent influences; the cover art of fantasy and science fiction novels which enthralled his imagination, and the saturation of cultural history woven into the fabric of European society. As a boy living in Naples, Italy, his mother took private painting lessons from a professional Neapolitan artist, introducing into the home a crucial sense of personal relevance to the arts.

As a late teenager and young adult Cody became hooked into art making as a platform for psychological exploration. Shortly thereafter he attended Wichita State University in Kansas where he earned his B.A. in Studio Art. During his tenure Cody was awarded a Freeman Asia grant used to live in Bangkok, Thailand for 6 months; traveling throughout the region and studying Buddhist Institutions at Thammasat University.

Between earning his bachelor’s degree and submitting to attend the Academy of Art University in San Francisco, California, Cody lived in Frederick, Maryland, where he was accepted into faculty at both the Delaplaine Center for Visual Arts Education and Frederick Community College.