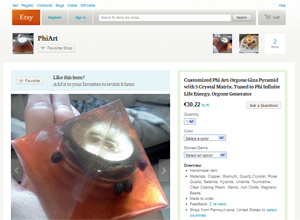 Phi-Art uses only the finest metals and crystals. You will not find any aluminum, brass or copper slivers or powders in the resin. The metals used contain coiled lengths of copper mathematically precise to certain measurements of the Phi ratio. This creates a vortex of energy that allows dead energy (DOR or negative polarity) to spin and transform into positive energy (OR, positive polarity). In radionic physics the degree in which energy is sent is based upon what is sending it; allowing the coils to be in exact measurement of the Golden Mean Ratio will allow an expansive and exact wave to produce the highest quality of high-state energy. These coils are surrounded by Bismuth that is pulverized to a very fine powder. Bismuth, apart from gold, is the best metal to use in exponentially increasing the power of the crystals and coils, providing a very strong and durable energy field. We believe in only using the best materials to produce the best results.

Phi-Art contains a 5 crystal matrix, Phi coiled copper lengths and bismuth powder. Rose quartz, Selenite and Kyanite are a standard within all pyramids in order to produce a calming feel and allowing it to cleanse itself from within. These molds are approximately proportionate to the Giza Pyramid. The Giza Pyramid is based upon the Fibonacci sequence and Phi ratios. Modern technology is unable to reproduce the quality in which the original pyramids were originally designed. The mystery behind the pyramids is in part the mathematics of its construction and these principles are used in the development of Phi-Art pyramids.

Orgonite:
The combination of a fiberglass resin, containing a lattice, metal chips, powders and slivers provides a matrix which has the capacity to attract and capture orgone (also commonly known as chi or prana) energy as Wilhelm Reich's research demonstrated and proved during 1930's and 40's. A crystal added will intensify the process. The affects increase with certain geometric layouts, and the crystal to be programmed towards a specific task or goal. Combining fiberglass resin with metal particles produces the Orgone attractive-repulsive effect described by Wilhelm Reich and which was later to be termed as "Orgonite".

Orgonite transmutes dead energy from cell phones, TV’s, computers, electronics, radio transceivers and numerous other electric devices that are not compatible to the electromagnetic fields that encompass a human being. These energies are spun to a higher degree, allowing it to transform to a high state and fully integrating into the environment without any harmful side effects.

These energies encompassing the human body are commonly referred to in many cultures, as well as the scientific community, as Aura, Spirit, Chi, Prana, Bio-Energies and EMF. These are only a few of the most common terms related to the total energies surrounding a human energy field. GDVe devices, currently used in some parts of the world and diagnostics specialists, are able to generate a clear picture of the field that surrounds the body. Kirlian photography is also a method to capture the blue energy of life that surrounds any healthy organism without expensive equipment.