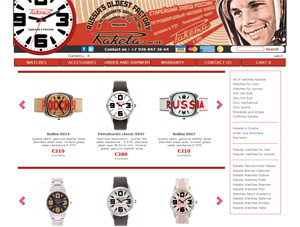 Raketa was founded in 1721 by Peter the Great and is the oldest factory in Russia. For almost 300 years, Raketa, formerly known as Petrodvorets Watch Factory, has produced and sold wristwatches to individuals in Russian and those around the world. Petrodvorets Watch Factory was renamed Raketa in 1961 to honor the World’s first cosmonaut Yuri Gagarin. Yuri was the first human to travel to outer space.

Over the years Raketa’s watches have been produced for the members of the Red Army, Soviet Navy, North Pole expeditions and civilians. Not only is Raketa respected by Russian leadership, but also popular with the public having an array of watch designs from practical to fashionable. Raketa even has the last remaining watchmaking school and operates this training program in conjunction with the Saint Petersberg Technical Institute.

Raketa produces all mechanical movements in-house, setting this watch factory apart. Raketa is now unique in an even more significant way in that it currently stands as the only watch factory to date accepting Bitcoins for payment.