Bitcoin vs Ethereum: Which Cryptocurrency Will Dominate the Future?

The second half of September 2018 was filled with excitement as well as infuriating cryptocurrency news, views, and whatnots. Perhaps the most infuriating to most cryptocurrency advocates being the Securities Exchanges Commission (SEC)’s decision to postpone a final decision on whether to approve a Bitcoin exchange-traded fund (ETF) until December 2018.

Had the decision come out in favor of a Bitcoin ETF, many expected the entire cryptocurrency world to benefit.

Pundits suggested the approval would boost the legitimacy of cryptocurrencies and Initial Coin Offerings (ICOs)—which would be great for everyone, whether you are a Bitcoin, Ether, Ripple, Litecoin or another up-swinging cryptocurrency advocate or investor.

On September 28, news hit out that a China court recognized the need to protect ETH (Ethereum’s Ether) as “a general property”. 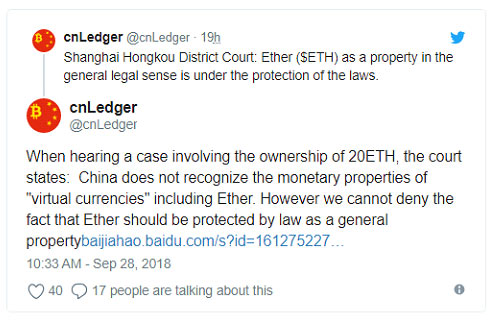 The moves add to the major boosts the industry has received in the past led by Bitcoin. Here is an interesting Bitcoin infographic highlighting Bitcoin facts, firsts, and favors that set a solid foundation for other “cryptos”.

But perhaps one that squawked a mixed reaction among cryptocurrencies’ two biggest advocates was a tweet by Weiss Ratings that Bitcoin was going to lose 50% of its market share to Ethereum within 5 years. 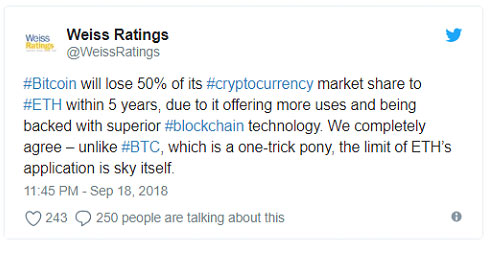 Before the ensuing eruption of commentary prodded them to recalibrate their wording to this: 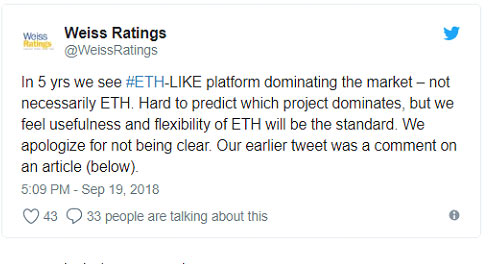 But the heated tweet prompts a rather appropriate and pragmatic question:

Between Bitcoin and Ethereum, which one will be more useful in the near and medium- to long-term future?

Now, comparing Bitcoin to Ethereum can feel like a case of Apples vs Mangoes kind of comparison.

The fact is the two are quite different, with Bitcoin-focused on being an alternative form of cash for the digital space while Ethereum is more of an ecosystem—a platform for supporting extended digital currency transactions.

But both utilize blockchain technology.

There are more differences between Ethereum and Bitcoin, including that Ether (ETH) is the token more comparable to Bitcoin in terms of usage as a digital currency, which forms the basis for this post.

As of September 28, 2018, here is how the top 10 cryptocurrencies market capitalizations stack up against each other, according to CoinMarketCap. 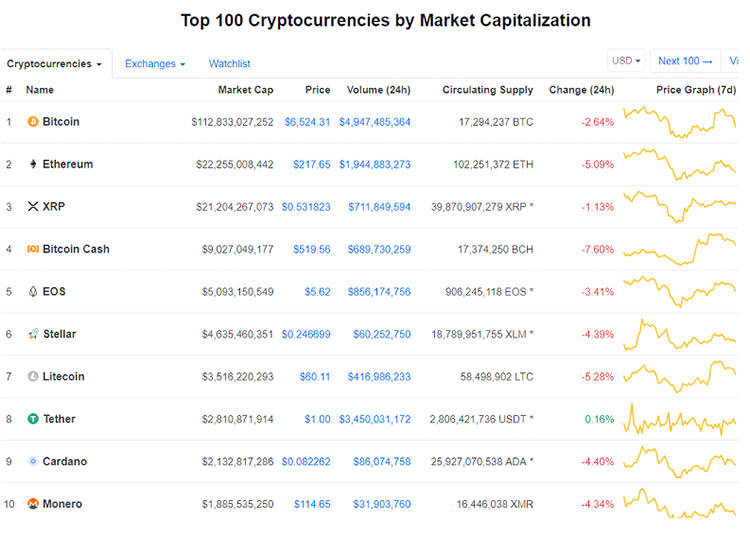 Cryptocurrency market capitalizations as of September 29, 2018, at 10:46 PM USA/Canada time.

But while the two seem to not compete against each other on paper, Ethereum’s newer and more sophisticated structure has been moving the bigger numbers in terms of transactions—positioning Ether, the ecosystem’s equivalent of a digital currency to the forefront corner against other cryptocurrencies.

Ethereum vs Bitcoin: Which is the Better Cryptocurrency for the Future

Clearly, there is a need for a cryptocurrency that can adapt its usability to users’ needs.

A case in point is Ripple’s (XRP) recent jump in September. That move was inspired by the crypto’s new feature, which is aimed at supporting some banks to directly send money across borders.

While at some point, Bitcoin was reportedly capable of becoming more than a digital currency, the current situation might indicate the pioneer cryptocurrency might remain a digital coin after all. And that is what led to the invention of Ethereum in 2013 as revealed by co-founder Vitalik Buterin in Ethereum’s white paper.

Also, according to Bitcoin’s initial white paper, only 21 million coins will ever be mined, with the number of unmined Bitcoin currently hovering at around 3.7 million. Bitcoin is a rare commodity and mining one takes about 10 minutes compared to the 12 seconds that Ethereum is working to stabilize.

As fewer and fewer Bitcoin remain for mining, it will increasingly become tougher to mine one to curb a Bitcoin inflation and raise (or at least maintain) its value.

That has seen the number of Ethereum in supply hit over 100 million in 2018 prompting concerns in the Ethereum community of inflation hence loss of value for Ether. That could mean more Ether users could ditch the Ethereum platform altogether.

The law of demand and supply favors Bitcoin’s hard-to-get algorithm, which might continue to position Bitcoin as a preferred payment method and probably the first true cryptocurrency to become a universally-endorsed digital store of value.

While Ethereum’s co-founder proposed to cap the supply of Ether at 120 million or twice the initial coin offering of 72 million (to 144 million), his proposal is yet to sail through.

An additional measure under consideration has included transitioning Ethereum’s Proof of Work (PoS) model to Proof of Stake (PoS), which could help cut annual inflation by 50% (from 10% to 0.5% per year). But that measure may well onset a non-profitable future for Ether miners—eventually making it too hard to mine Ether hence unattractive.

However, with the exponential boost in cryptocurrency appeal, how Bitcoin works limits its scalability and versatility.

On the flip-side, Ethereum was built for scalability and multiple use cases since it has to support many more uses as a decentralized, open-ended, cryptography-based platform for other blockchain applications. The third-party applications then use Ether as the de facto medium of exchange.

In fact, Ethereum has been exploring ways to support faster scalability by using sharding and other techniques to match users’ demand. Sharding involves horizontally partitioning a large database into smaller, easier to manage chunks.

Using a PoS model would help with that in addition to making the platform 51% more secure, less centralized, and more energy-efficient than PoW based cryptocurrencies such as Bitcoin.

But that, plus the open-ended bit of the platform, have also posed security challenges like the June DAO hack attack.

Smart Contracts Could be the Future

Yet, Ethereum has caught on because of its most distinguishing feature and benefit compared to Bitcoin: smart contracts.

Smart contracts allow users to create digital tokens for use as representations of shares, proof of membership, digital assets, fundraising, and also as a form of voting. Ethereum can work as a crowdfunding platform. No need for Kickstarter or Indiegogo.

That, while maintaining the decentralized and autonomous working of the blockchain technology running the platform’s core.

Bitcoin cannot do that—at least not yet. Or, probably never will.

However, the technology has had kinks that need fleshing out to make it a more user-friendly system. But what separates Bitcoin and Ethereum here is the fact that Ethereum has actual techies working to make its algorithm more efficient, faster and scalable, unlike Bitcoin which is currently running on almost 10 years old technology.

Whichever of the two rises to solve the raised concerns in the cryptocurrency space in the near to not so near future, one thing is certain:

Blockchain technology will continue to witness exponential growth in both popularity and adoption for a lot longer. While both Ethereum and Bitcoin use the technology, Bitcoin is yet to allow users to do more than use the algorithm for making digital payments.

Ethereum, however, took up and ran with that need in stride, but the smart contracts bit is proving to be quite expensive in terms of its transfer fee structure and the specific system is clunky for now.

But if there is anything the cryptocurrency boom has taught in the last 5 years or so, it is to not expect the expected. That could mean we might see the Weiss Rating tweet become a reality.

Or Bitcoin could continue to lead the industry as the preferred digital currency across the board. In fact, Ethereum not only started on the back of Bitcoin but it was crowdfunded using Bitcoin.

Or we could see an entirely new cryptocurrency sprung up to solve the use case, security, scalability and mass appeal challenges the cryptocurrency market is dealing with.

Which of the two do you think will offer better value in the future?