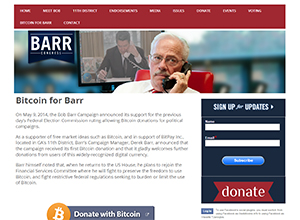 On May 9, 2014, the Bob Barr Campaign announced its support for the previous day’s Federal Election Commission ruling allowing Bitcoin donations for political campaigns.

As a supporter of free market ideas such as Bitcoin, and in support of BitPay Inc., located in GA’s 11th District, Barr’s Campaign Manager, Derek Barr, announced that the campaign received its first Bitcoin donation and that it gladly welcomes further donations from users of this widely-recognized digital currency.

Barr himself noted that, when he returns to the US House, he plans to rejoin the Financial Services Committee where he will fight to preserve the freedom to use Bitcoin, and fight restrictive federal regulations seeking to burden or limit the use of Bitcoin.